ALL CUSTOMERS: PLEASE CALL THE STORE REGARDING AVAILABILITY ON ALL ITEMS. THIS WILL ENSURE THAT THE ITEMS YOU ARE LOOKING FOR ARE IN STOCK AND AVAILABLE FOR PURCHASE. THANK YOU! 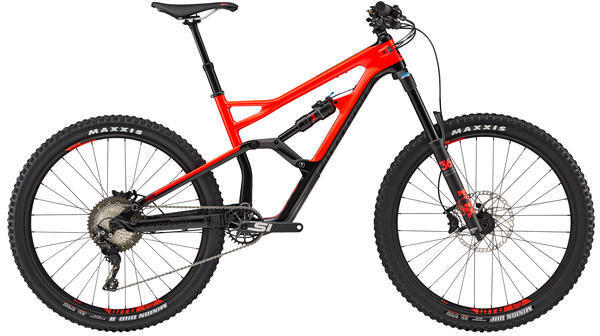 When you’re on the Jekyll 3 from Cannondale, nothing dares get in your way. That’s because Jekyll’s fast, light, and tough BallisTec carbon frame shrugs off enduro brutality and arrives at the bottom begging to do it again and again. And you will, too, with 165mm of Fox DPS EVOL-guided travel in back and 170mm more up front, courtesy of Fox’s stiff, enduro-loving Float 36 fork. Together, they make easy work of gnarly descents where the only break you get is the climb back up. Since we’re talking about climbing, the Jekyll is no slouch in the uphill department, either, with a switch-on-the-fly rear suspension that offers Hustle Mode for tenacious efficiency. Put the power to the Shimano SLX drivetrain via Cannondale’s Si crankset, and you’ll gain elevation as fast as you drop the competition. And, for all-mountain dominance, you won’t find better rubber than the Jekyll’s Maxxis Minions, wrapped around 29mm WTB STP rims, well-known as workhorse hoops that’ll bail you out of your risky moves straight as an arrow. Shimano also provides powerful hydraulic brakes that keep you on course, even when that course can only be described as “sketchy.” So, jump on, slam the TransX dropper post, and flow this trail beast straight to victory.

* Subject to change without notice.